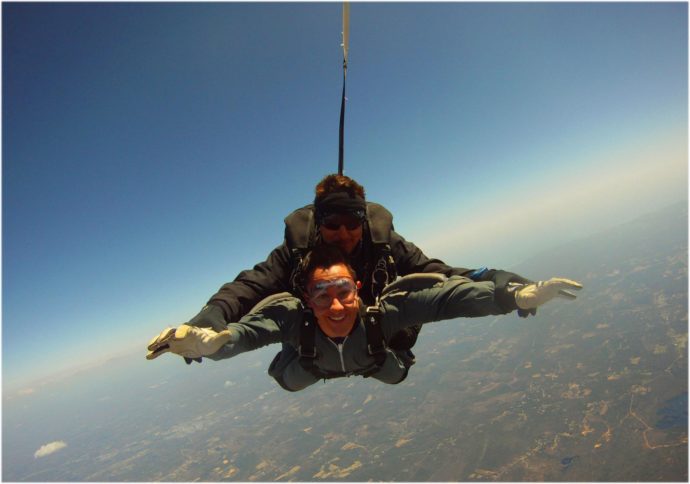 The year is 2013 and I’m a senior in college at Bentley University. Having finally talked two of my friends into it, we were going tandem skydiving today. As one person at the dropzone accurately put it:

Holy shitballs. I’m about to jump out of a plane.

Terror doesn’t even begin to fully describe my feelings. The 1.5 hour drive up to Lebanon, Maine to Skydive New England from Boston was a free fall of emotions in itself (get it?) But we were on a mission and we were going through with this.

Side note: the staff was amazing, answering every question even if I asked it twice, just in a different way (because let’s be honest there are 36 ways to rephrase the question: what happens if the chute doesn’t deploy.) They are even psychologists in a way, accurately interpreting my emotions and countering them to get me on up there, because deep down they knew I was going to benefit from this. We’ll get back to that later.

The ride up was about as uneventful as climbing to 14,500 ft can be in a perfectly functioning airplane that you know you’re about to exit. Again, the person I was attached to and the camera person both did a great job of keeping me excited and making it fun. Probably because they saw the color drain out of my face every time I looked out the window.

The green light went on. They asked me: are you ready to skydive? My brain said no but my mouth said yes and I edged to the door, refusing to look at the ground. And then I was out the door. I’ll spare the details, just watch:

I have a total fear of heights — acrophobia (yes I googled it.) So clinging onto that parachute was a definite, you can even see him tear my hands off of it around :33. But then the adrenaline kicked in, I looked around and realized that I was flying. Nothing in that moment, especially acrophobia, could stop me from producing the biggest smile in the world. I was so exhilarated I almost forgot to breathe.

As quickly as it started it was over, approximately 60 seconds later and a few thousand feet. The chute was out and now we were gliding towards earth, doing some 360s and such.

As we approached earth and the dropzone he asked the golden question: Him: How’d you like it? Me: It was unreal. Best thing I’ve ever done. Him: Would you do it again? Me: Abso-freaking-lutely. Him: You should look into AFF (Accelerated Free Fall) classes here. If you liked this jump, then you’ll love it.

He then proceeded to tell me about it and the steps required. As we were flying in a parachute about 3,000 ft above the earth. In that moment, I couldn’t see myself doing anything else other than getting my skydive license. They had given me a taste of the adrenaline rush and I wanted more than just a tandem jump. They had me.

Tandem jumps are not cheap. Approximately $200 for the jump and another $100 or more for the video package. AFF is even more expensive with the class being $150 and the first 3 jumps towards your 25 jump total each costing $199. The prices go down a little from there but you still need 25 total jumps for your license.

In other words, my skydiving instructor totally upsold me and I let him.

From wikipedia: “Upselling is a sales technique where a seller induces the customer to purchase more expensive items, upgrades or other add-ons in an attempt to make a more profitable sale.”.

Fast forward to 2017 when I have a little more disposable income and took some time off between jobs. I just completed my Level 2 jump and am loving it. Every single second.

Level 2 down. On to the next one #aff #skydiving

I’m not showing any signs of slowing down. There are many places closer where I can do my jumps or take these classes but guess what? I’m still driving 1.5 hours to Maine on Saturdays and Sundays at 6:30 to get their for opening because of the experience THEY created for me.

My skydiving instructor, and dropzone, all those years ago created a compelling experience at EVERY touchpoint for the consumer. Not just the product they were selling. The safety checks and orientation. The dropzone appearing professional. The staff being helpful and patient. Everyone keeping it fun, exciting, and engaging, without too much pressure. All of it leading up to the jump which is what I had paid for.

Then once I had an amazing experience that they had created, they associated those feelings of energy, pure life, flying, and adrenaline with their product and brand. They brought up the chance to do it again but for an even greater experience. While still engaged in the moment they gave me the details enough to research on my own and buy an even more expensive product. Every time I thought about it or researched it I got a rush of dopamine that made it impossible for me to turn down.

This particular salesperson proved to me that they were users of the product and showed the amazing benefit it had on their life. They didn’t just go through an orientation and try to sell it from the outside. They lived this life and product everyday. All their information was organic, raw, and true and as a consumer we can feel that. If it was a person trying to sell a vacation to another country I would equate it to someone who instead of visiting for a few trips had given up a portion of their life and went to live there for 6 months because it was so amazing.

They also weren’t just skydiving instructors. Like I said they were psychologists in their own right. At every touch point they counteracted my fears with positive emotions, my excitement with their own, my inquisitiveness with answers. Many skydiver instructors start out with a similar fear of height that everyone else does and they knew the things to say to sell it to me.

Life is found on the other side of fear. Successfully completed my Level 1 jump! Huge shout out to @skydivenewengland

It’s with all of this that I realized someone who lives their brand, can let consumers experience it in a unique and awesome way, and who knows how to correctly use emotions (not manipulate them) is an amazing salesperson.

Thank you to Skydive New England and it’s amazing staff members. You can take all my money now please.